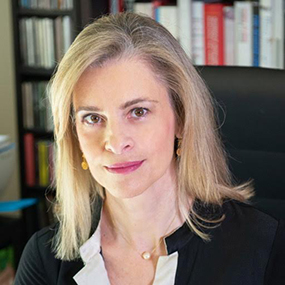 She has been awarded Greek and international scholarships and academic distinctions (e.g. Hellenic State Scholarships Foundation-IKY, Erasmus Program, ECTS, Karamanlis Foundation, Andreadis Foundation, US IVLP Program, DAAD, Bank of Greece a.o.). She was a research fellow at the Hellenic National Audiovisual Archive (2007-2009) and the LSE IDEAS think tank (2013-2015) as well as academic director in the historical archive project of the Hellenic Police (2015-2017). She has been a board member of the National Library of Greece, the Academic Council of the Diplomatic Academy at the Hellenic Ministry of Foreign Affairs, the Hellenic Parliament Foundation, the Martens Centre for European Studies, the Online-Compendium of Greek-German Intersections a.o. She is the director of the series “Modern History” at Papadopoulos Publishers. She is an op-ed columnist in many newspapers and an academic consultant in Greek and international historical documentaries. From 2011 until 2018 she served as Director of Publications and Research (2001-2009), General Director (2010-2011 and 2016-2018), and Vice President (2011-2014) at the Konstantinos Karamanlis Institute for Democracy.

Her publications include 15 books, articles and chapters in collective volumes mainly about modern and contemporary history, European integration, cold war, Balkan history, Euro-Atlantic relations, political parties, defense and foreign policy. Among others, she is the author of Greece’s course to Europe: from the Truman Doctrine to he Association Agreement with the EEC, 1947-1961, Frankfurt, 1999 (in German); Between NATO and the EEC, 1949-1957, Athens, 2002; Booklets of Parliamentary Speeches (ed.), Athens, 2010; The Founders of European Integration (ed. with C. Svolopoulos), Athens, 2013; The Balkans in the Cold War (ed. with S. Rajak et al.), London, 2017 (Greek edition, 2019).