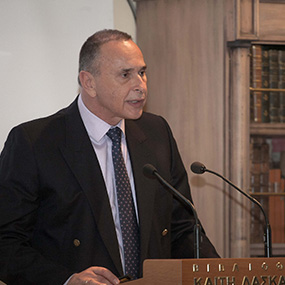 He received a degree in Public Law and Political Science (with excellence) from the Law Faculty of the University of Athens (1979). He also received an M.A and a Ph.D in International Relations from the Department of Government at Cornell University (1986).

Professor Platias taught for 18 years (1989-2007) at the Department of International and European Studies at Panteion University of Political and Social Sciences, Athens Greece.

Professor Platias held several senior policy advisory positions in various Greek Ministries during the last 30 years. He was also chairman of the Department of International and European Studies (2008-2013) and a member of the Supervisory Council of the University of Piraeus (2012-2017).

Professor Platias is the author of numerous books and articles. He has written in five principal areas: